The winners are in!

(July 2011) The 2011 Midwest EGGS’travaganza Emu Egg Art Contest, sponsored by the American Emu Association (AEA), has been held and the top three emu egg “works of art” have been chosen.

After several weeks on the AEA Egg Art Contest website, www.AEAEggArtContest.com , and a full day on public display at the Crowne Plaza Airport Hotel in Minneapolis, the People’s Choice for these beautiful decorated eggs have been named. 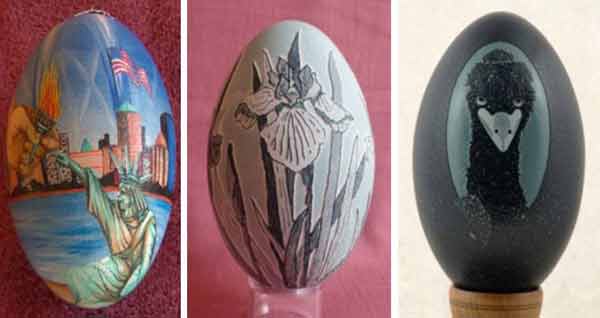 1st place winner Mike Jorgensen of Medford, WI (above left), painted his egg free hand in vivid colors with acrylic paints. His emu egg depicted the falling of the Twin Towers on 9/11 with the statue of liberty weeping, the US flag fallen and hand of God reaching out to help put together the pieces. Side #1 – “Lady Liberty Losing hope. Side #2 – Lady liberty out of the Ashes.

2nd place winner – Satoke Kano of Elk Grove Village, IL (above middle) used Japanese style of painting using beeswax and then dipping the entire emu egg in vinegar to naturally etch away the layers of egg shell. Wax was applied, dipped in vinegar, the wax removed and then repeated in seven different layers allowing small differences in the colors of dark green, teal then, ultimately, white to show and create the design of Japanese Irises. Satoke is a member of International Egg Art Guild and specializes in unusual art form here in the United States.

3rd place winner – Nicholas A. Poleschuk, Jr., of Rochester, MN (above right) carved an emu head based on a photo he took of an emu named Lampshade. His technique is different from many egg carvers as he used small files to create the very smooth almost glass like etching of the emu face. Nick is new to egg carving and is taking lessons from Gary LeMaster, Iowa egg artist.

Other 2011 egg entries included: a hand painted emu egg using a toothpick to make dot images by Nina Azari from Fort Collins, CO; a satin lined and decorated combination music box/jewelry box created by Reva Williamson from Fort Collins, CO; a carved and jeweled emu egg that holds a child ballerina by Marilyn Miller from Cedar Falls, IA; an emu egg carved into a delicate 1″ wide curled ribbon by Terry Turner from Livermore, CO; a cartoon-like “Sir Dumpty” using acrylic paint by Dale Crawford from Fort Collins, CO; a carved and decorated emu egg with a dangling glass angel inside by Linda Wilson from Toddville, IA; a cut crystal studded emu egg decorated in symmetrical patterns (vertical, horizontal and diagonal) by Joylene Reavis from Brodhead, WI and another hand painted woodland scene of a black bear by a creek by Mike Jorgensen from Medford, WI.

Information about the 2012 contest along with pictures of this year’s winning eggs and entries can be viewed at http://www.AEAEggArtContest.com.

These large, dark green emu eggshells, with layers of dark green, turquoise and white, lend themselves to the creation of beautiful art work. The emu eggs are first emptied. Then the shells are washed and sanitized. The eggshells can be carved, etched, painted, hung like Christmas ornaments, made into jewelry boxes and music boxes or decorated like the famous Faberge eggs.

Many artists choose to carve emu eggs because of the different color layers. The dark green outer covering varies from hunter green to almost black. The middle color is a teal green, the inside a bright white. The teal is actually as many as seven subtle layers of color, each about the thickness of a sheet of paper. These different layers of color can be utilized to add texture and depth to artwork and make even a simple design dramatic. The texture, contrast and natural colors of the shell make even a simple design dramatic. Many interesting items, including nightlights, can be made from a lacework cut eggshell.