Judging and Conformation of Emus

Gentle pecking would be considered a positive trait, as this activity indicates curiosity, friendliness and calmness.  An exception is hard or violent pecking mischievously at the ears and eyes, etc. of the judge or participant.  This should be grounds for down grading.  Minor flare-ups of a raised neck, neck feathers and hissing toward other birds should not be cause for down grading. Running in a panic, jumping, kicking and fighting between birds is considered undesirable. A good bird should have a normal respiration rate and stand and walk in style (strut). A bird with superior conformation but undesirable behavior would be down graded and judged lower than a bird with good conformation and desirable behavior. Most all birds can be imprinted and learn to be very calm and well behaved and a participant should be rewarded for this achievement. All birds should have documentation of age and sex.

Judging and Conformation of Emus

Beak – The color should be black. The upper beak is a triangle shaped on cross section with the tip even or only slightly overlapping the tip of the lower beak. Serrations on the edge may or may not be present. Look for abnormal color, shape, size, lumps, scars, parrot beak, etc. Nares, or nose openings are oval shaped on each side of the upper beak.  These should be free of discharge and debris. Eyelids  The lids may be solid black or have white regions. Eyelashes should be present.  The lid margins should be even and retracted to expose the eyeball. Look for uneven edges, lack of lashes, lumps, scars, scrapes, droopy eyelids, etc.

Third Eyelid – This lid is normally retracted to the medial side of the eye and expands rapidly over the eye in response to objects nearing the eye.

Eyes – The eye should be oval.  Evaluate for discharge, scars, cataracts, cloudiness, etc.  Emu as chicks have brown eyes which become golden brown as they reach breeding age.Â  As they get older, the eye color changes to golden orange.Â  In blonde or white emus, the eyes may be blue.

Head – The head, including the beak, should appear to be the appropriate size for the body. The head should be rounded in shape.  Flat, long-sloping or short-sloping foreheads are not normal. Also, look for scars, lumps, etc. 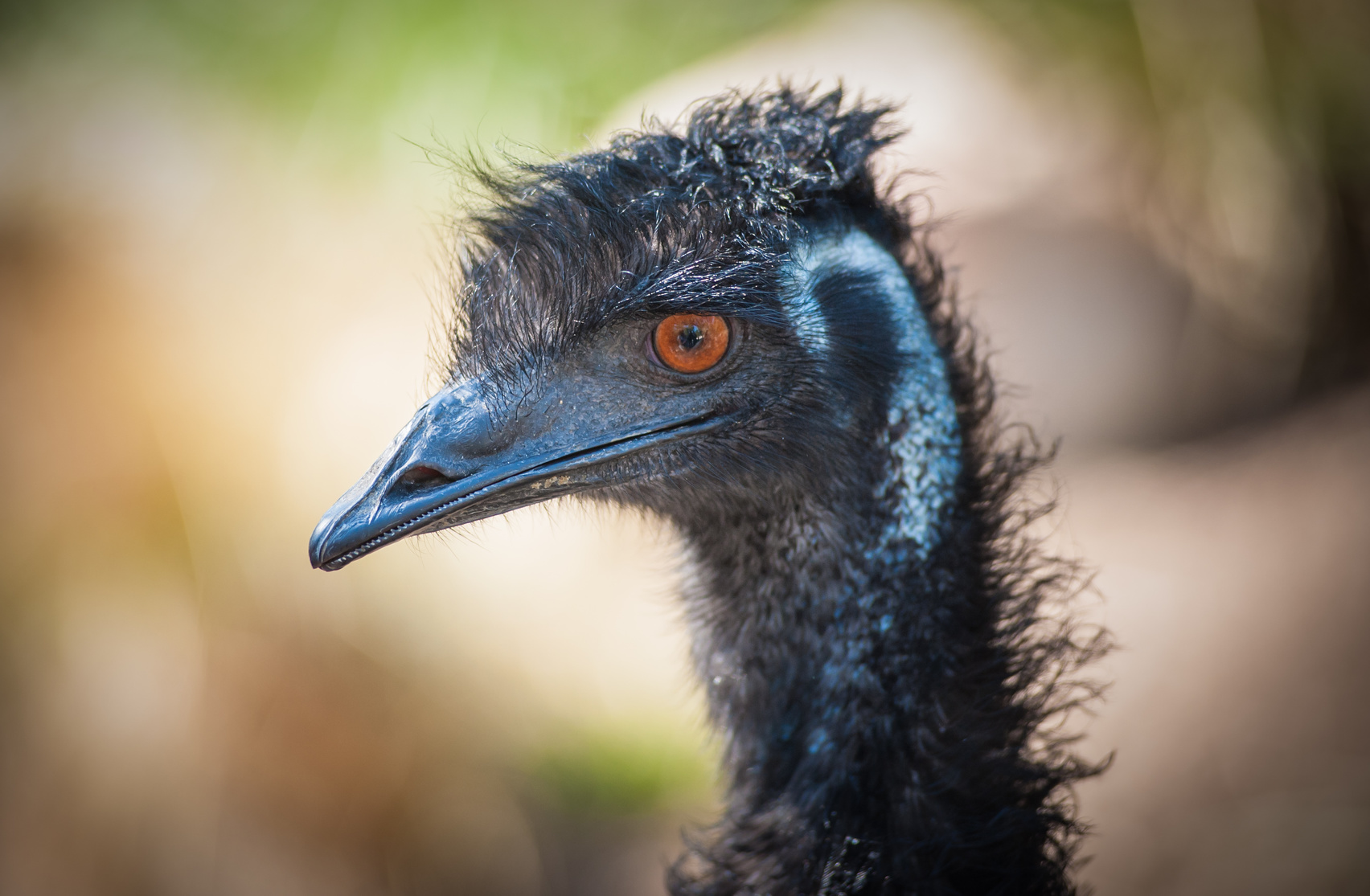 Mouth – The mouth should be opened and the tongue, esophagus, choanal slit and oral mucosa examined. Ulcers, white spots, excess mucous, blood, lumps and bright red or pale white mucosa are not normal. The tongue should have serrations and a pointed end.

Ear Canal – The normal location is behind the eye and beak on the side of the head at the level of the articulation of the upper and lower beak. Evaluate the size, shape, and feather coverts. The canal should be free of debris and discharge.

Skin – The skin color on the back of the head and upper neck is a variation of blue, white, tan and black which varies with age and breeding season. The skin in front of the neck should be evaluated for feather loss and scars due to fence rubbing. Skin over the rest of the body should be pinkish to white in color. Dry, scaly skin, scabs and scars from abrasions are not to be considered normal.

Neck – The neck should be carried upright with a downward slope from the back and backward curve toward the head.  The neck should be palpitated to evaluate the straightness and determine if lumps or other anomalies are present. If the bird has just eaten, the food may appear as a lump.